Hi, My name is Shawn, and my son’s name is Kyle. Kyle received a (non-blood related) living donor liver transplant at Egleston Children’s Hospital in Atlanta on Dec. 19th, 2000. He was 15 months old at the time of transplant. We would love to share Kyle’s story with other people interested in living donor living transplants. Here is Kyle’s story.

Kyle is 2 years old, healthy, happy, and very active. He likes cars, books, and playing outside. In almost every way, he is a normal, healthy little boy; but life for Kyle has been anything but normal. On Sept. 13th, 1999, we welcomed Kyle in to our home. He was a healthy 7 pound 13 ounce little boy. But when he was 6 1/2 weeks old, he became jaundiced. Within 2 weeks, he was admitted to the hospital and was undergoing numerous tests. At two months old, he was diagnosed with Biliary Atresia, a liver disease that affects the bile ducts. Kyle no longer had functioning bile ducts and his liver was unable to drain. Kyle had surgery to attach his liver to his intestines so that it could drain, but he soon developed a bile leak, peritonitis, and bacterial pneumonia.

We understood that if he recovered, he would need a transplant if he was going to live to be 2 years old. I was tested and denied as a living donor before he was even officially on the transplant list. By 3 1/2 months old, Kyle was listed for a liver transplant. Months followed, as did numerous fevers, infections, and hospital visits. By the time Kyle was a year old, ascites often made breathing difficult, and his kidneys were becoming toxic from the diuretics. He had cirrhosis and portal hypertension, an enlarged liver and spleen, and a heart murmur. He had numerous intestinal and GI problems, ulcers, and problems with his blood not clotting properly. He had very little muscle tone, and had trouble gaining weight.

We tested one potential living donor after another with no success. We also had no calls from the transplant team. The fifth person to be tested was Kyle’s uncle Paul. He made it to the final test before he was told he could not be a donor for Kyle. We were out of eligible family members who could be tested.

However, the story doesn’t end there. When Paul went home, his wife offered to get tested. Even though Lyn is not a blood relative to Kyle, she proved to be the match we had been searching for. On December 19th, 2000 -almost exactly a year since we started testing for donors- Kyle received a piece of his aunt’s liver. It was Kyle’s 25th admission to the hospital in less than 14 months. Three days after transplant, Kyle was jumping up and down in his bed. By the fourth day, he was eating regular meals again, and on day 5, he was walking around the ICU pulling the ornaments off the Christmas tree. He has not spent even one night in the hospital since he came home after transplant.

Lyn, Kyle’s donor, also did excellent. Her surgery only lasted 3 hours, and she was out of the hospital in a week, and back home to Wisconsin within 2 weeks. By the time Lyn was two months post-transplant, she was back to cross-country skiing. She continues to do well, with no complications from the surgery 1 year post transplant. We are now thoroughly enjoying watching our little boy grow up, thanks to the loving gift from his wonderful aunt, a wonderful team of doctors, and a the grace of God. We hope that telling Kyle’s story will encourage other liver transplant candidates.

Please feel free to include our email address: Gacurrycrew@aol.com.

I have included a picture of Kyle taken 4 months after his transplant. 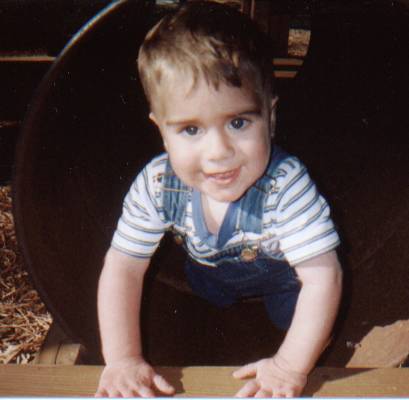